What is scientific translation and how does it relate to your company? 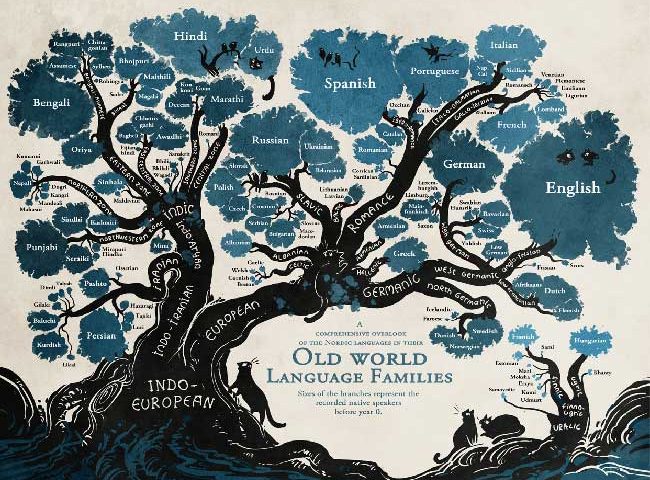 Let’s start at the beginning: what is a language family?

A language family is a group of several languages that share linguistic links, having derived from a common ancestral language. It is possible to distinguish resemblances between the languages within a family. For example, there are similarities between French and Spanish, or between German and Danish. French and Spanish, along with Italian, Portuguese and even Romanian, are known as the Romance languages, derived from a single common ancestral language, Latin. German, English, Dutch, as well as Danish, Norwegian and Swedish, belong to the Germanic language family.

There are more than one hundred language families, but the world’s linguists have been unable to reach a consensus as to an exact number.

The principal language family is that of Indo-European languages. What does this name mean?

Despite the fact that India and Europe are geographically remote from each other, the languages spoken in these regions nevertheless share a single ancestor. Researchers have demonstrated that Sanskrit, Latin, Greek, Hittite, Old Irish, Gothic and Old Bulgarian all derive from the same language. Today, the branches of the Indo-European language family are as follows: the Indo-Iranian languages (e.g. Sanskrit, Hindi, Persian), the Balto-Slavic languages (e.g. Polish, Russian, Latvian, Lithuanian), the Celtic languages (e.g. Gaelic, Welsh, Breton), the Italic languages (i.e. the Romance languages), and the Germanic languages. Lastly, Greek occupies the Hellenic branch all on its own. The Indo-European languages are spoken by around 48% of the world’s population, and the family comprises more than 200 languages. And yet, Indo-Iranian and European languages are very different from each other today. How can they be derived from the same language? By studying many texts, researchers have deduced that there was once a people living to the east of Turkey. This group split into two, with one sub-group setting out east to Asia, and the other heading west towards Europe. These two sub-groups then fragmented into various other groups and, as they settled in different parts of Europe and Asia, their languages evolved separately from each other.

Here is an illustration of the Indo-European linguistic family tree: 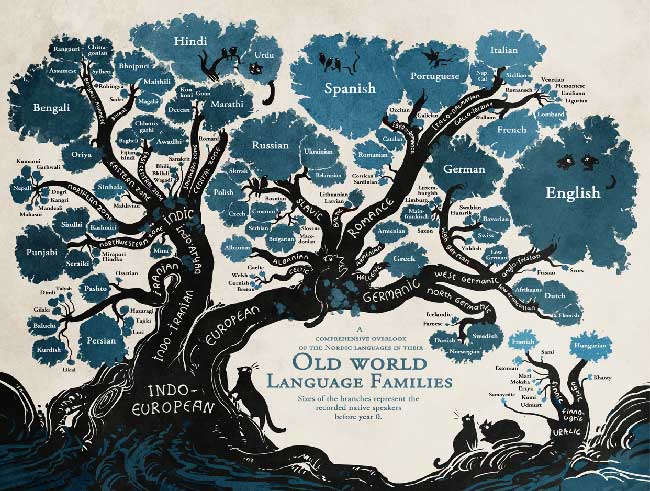 Of course, these language families did not evolve in a vacuum, and there is evidence of inter-language influence. For example, English has had considerable influence on French in recent years, resulting in the creation of many Anglicisms. The English language itself is a patchwork drawn from a number of languages. In order to understand the evolution of a language, it is often necessary to delve into history. In the case of English, Old English (or Anglo-Saxon) derived from the languages of the peoples that colonised England: the Old Norse of the Vikings, Old German of the Germanic tribes, Latin during Christianisation in the 7th century, and then Norman influence from 1066. When a language comes into contact with another (over a prolonged period), and in particular when a foreign invader attempts to impose its culture on another, the languages necessarily influence each other. England was ruled by Norman (Old French) kings for many years, which explains why there are so many words of French derivation in the English language.

Our languages are living, or modern, languages; they evolve and change over time as a result of their speakers and historic events. Sadly, many languages are endangered and others, such as Latin and Gothic, are already extinct. Linguists estimate that, over the last 5,000 years or so, at least 30,000 languages have been lost, and that around 7,000 languages now exist around the world. It is thought that languages are dying out at the approximate rate of one language every 15 days.

Tradoc is a translation specialist with 30 years of experience. To discuss your translation and interpreting needs, please give us a call or contact us via the contact form or by email.